Thermal mass consists of exposed tile floors over concrete, mass walls such as stone or brick, and other heavy elements within the building envelope that serve to stabilize indoor temperatures. Thermal mass acts for temperature much like a flywheel – it tends to keep things warmer when it is cold outside and keep things cooler when it is hot outside. In California’s central valley and desert climates, the summer temperature range between night and day can be 30°F or more and thermal mass can be an effective strategy to reduce daytime cooling loads. 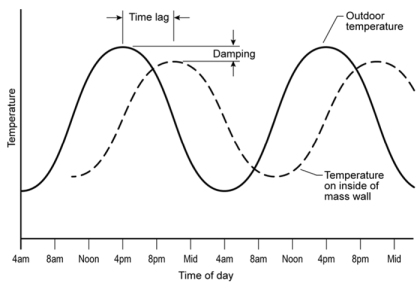